I have been in this city since Monday now, after 24 hours of travel from Pune, and I am so glad to have completely fallen in love with this country, of whatever little I have seen in these two days. The weather, the people, the whole culture, Istanbul seems to be the perfect marriage of its past and present, of the old and the new. The city of Istanbul is important to geography because it has a long history that spans the rise and fall of the world’s most famous empires. Built by emperors and buried by emperors too many times, the city stands on the ruins of its past, glorifying the history of the present. Istanbul is the largest city in Turkey, located on the Bosporus Strait it covers the entire area of the Golden Horn – a natural harbor. Because of its size, Istanbul extends into both Europe and Asia. The city is the world’s only metropolis to extend into more than one continent.

Due to its participation in these empires, Istanbul has also undergone various name changes throughout its lengthy history.

HISTORY OF ISTANBUL IN BRIEF

Also known as the European Capital of Culture because of its melting pot of populace and various religions as well as culture, Istanbul maintains that fine distinguishing line that let’s a traveller understand the many mysteries and tales that this city hides. Since my hotel is located at the heart of European side of Istanbul, at Gülhane Park, I decided to take a trip to the very very famous Hagia Sophia and the Blue Mosque.

After having a brilliant breakfast, I strolled out, taking in the beautiful breeze and the good looking men. After about 600meters, I reached my first destination.

One of the most mysterious and extremely written about monuments in the city’s history, the Hagia Sophia survived earthquakes, religious power struggles, and has been a church (basilica), a mosque and is now a museum. It is known as the Ayasofya in Turkish, and was dedicated to the Wisdom (Sophia) of God. There were once two more churches that were regarded as “Churches of Divine Wisdom” but the Hagia Sophia is the last that remains.

From the time of its construction between 532 and 537 AD, on the orders of Byzantine Emperor Justinian I, through to 1453 AD, the Hagia Sophia served as a cathedral for the Eastern Orthodox Church. However, Constantinople, as Istanbul was once called, was conquered by the Ottoman Turks at this time, and the Hagia Sophia was converted into a mosque by order of Sultan Mehmed II. Relics such as the shroud of Mary, nails from the true cross and the tombstone of Jesus were some of its treasures, until the city was ransacked during the Fourth crusade. It remained in use as a mosque until as recently as 1931, when it was closed down for four years to be reopened as a museum in 1935 by the first President of Turkey, Mustafa Kemal Ataturk.

When I entered the monument, I was not only transported to a different time, but I could also decipher the existence of two most primary religion. While the Islamic sanctions remains, right above the structure is Virgin Mary, holding baby Jesus, protected by Archangels Gabriel and Michael. Also, guarding above the door are two angels, guardians of the heaven. As one enters, one sees the ceiling that was built at a height so high that it was supposedly a doorway to heaven.  Apart that, there are a couple of tombstones that one can see around the monuments, and one of the largest baptism area that Istanbul had in those days. As Hagia Sophia maintains the balance between the two religious powers, I couldn’t help but wonder how difficult was it for humanity to co-exist so peacefully? 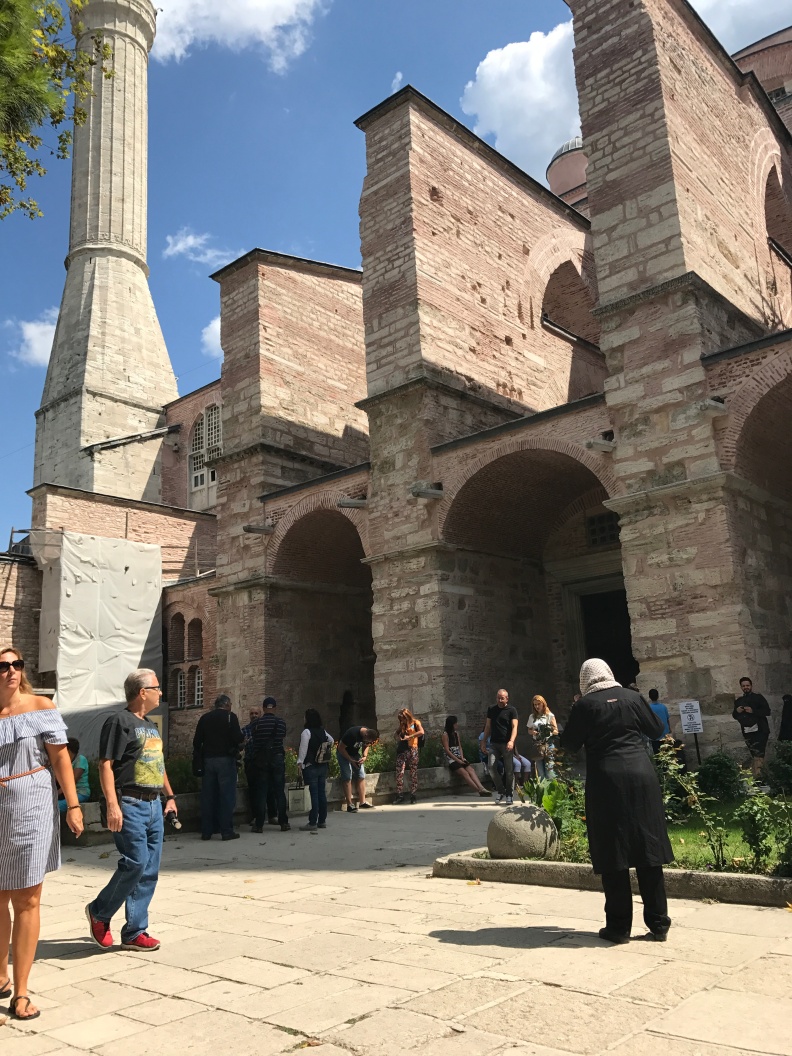 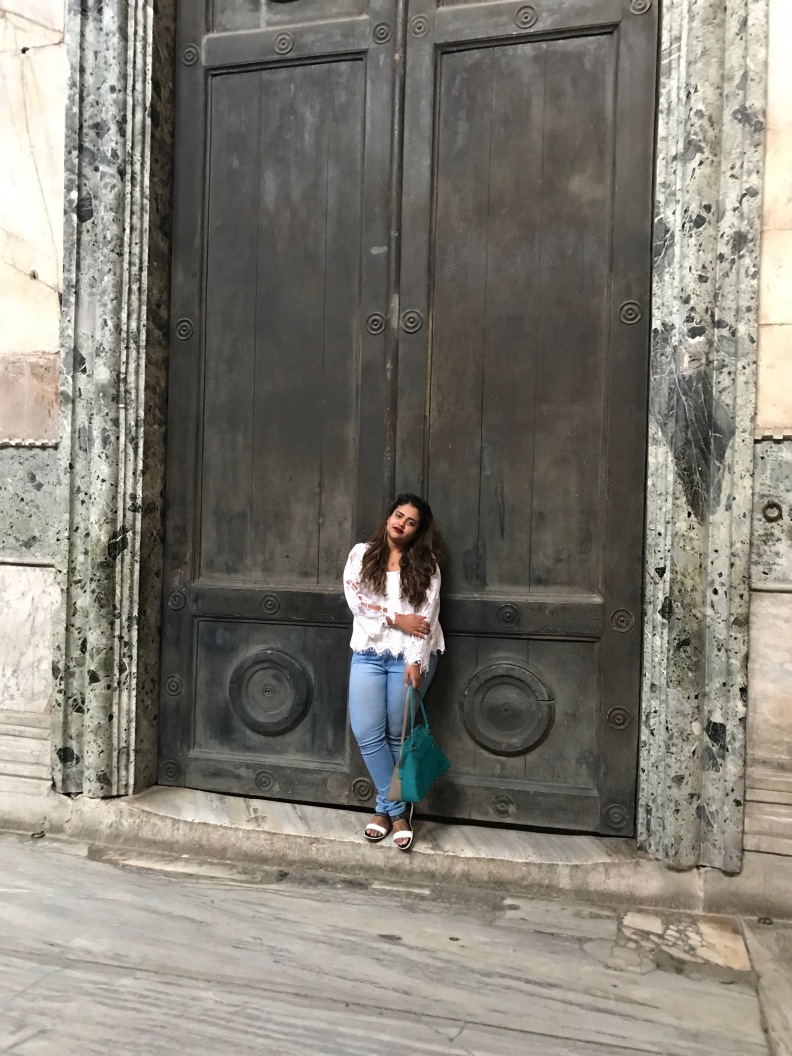 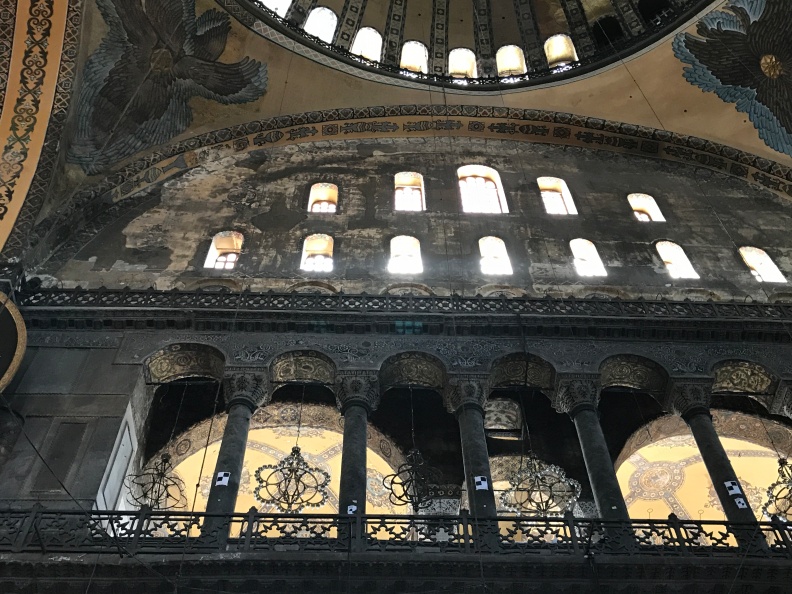 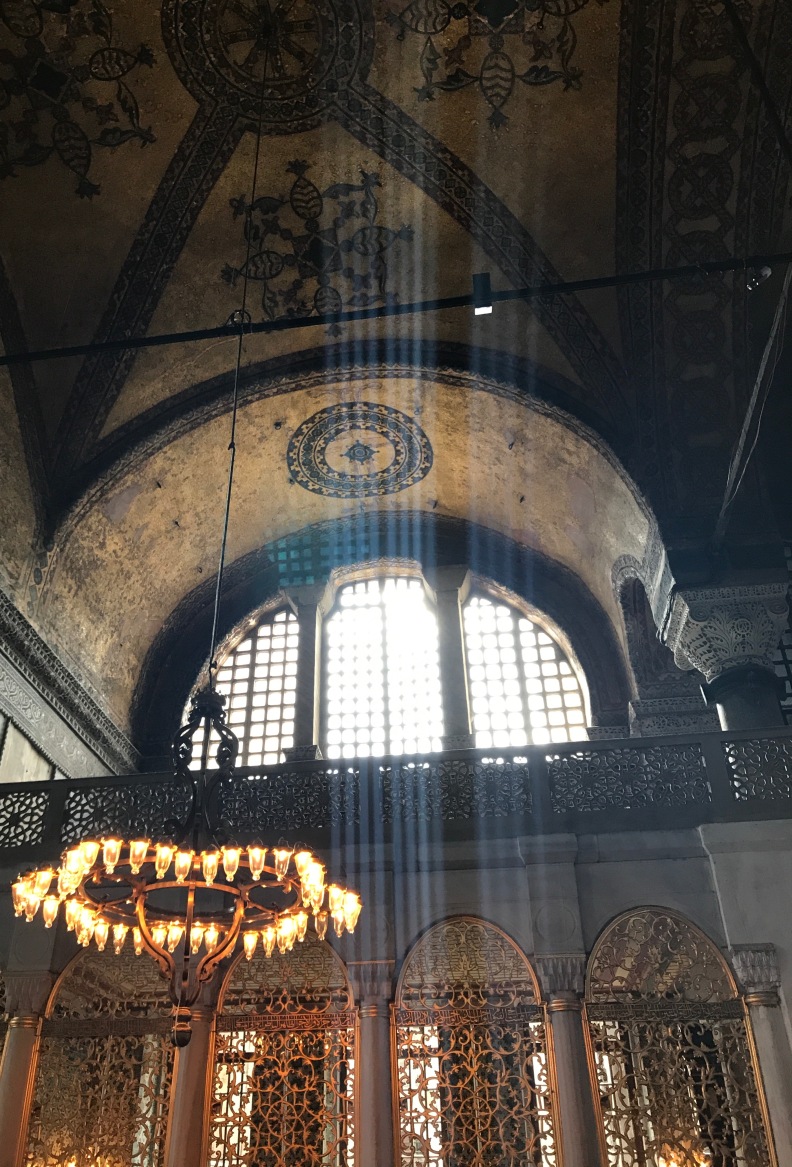 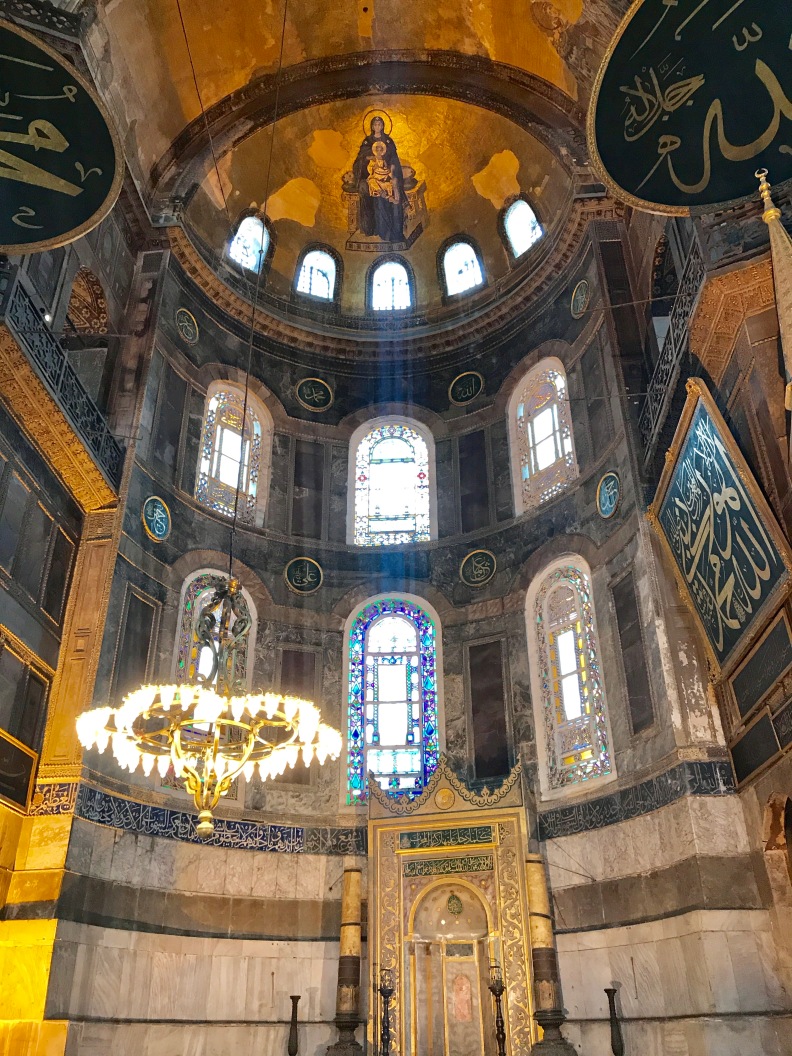 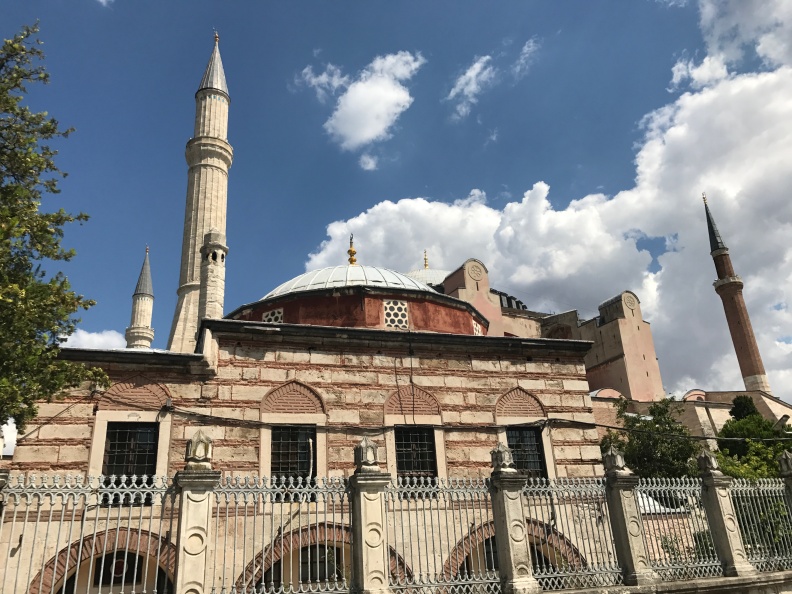 Istanbul’s Blue Mosque is also known as Sultanahmet Mosque, named after Sultan Ahmet I who wished to build an Islamic place of worship that would compete with the Hagia Sophia. The two places of worship now stand side by side for visitors to judge which is the more extraordinary of the architectural marvels. Mosques traditionally have one, two or four minarets. What makes the Blue Mosque unique as it boasts six minarets. Although the main west entrance is far grander than the north entrance, non-worshippers are asked to use the north entrance, like I was, to keep the mosque’s sacredness intact. The Blue Mosque’s interior is lit with two hundred and sixty windows which were once filled with stained glass of the seventeenth century. Unfortunately they have been lost and replaced with replicas far more inferior. The mosque’s interior has 20,000 blue tiles that line its high ceiling. The oldest of these tiles feature flowers, trees and abstract patterns that make them fine examples of sixteenth century Iznik design. 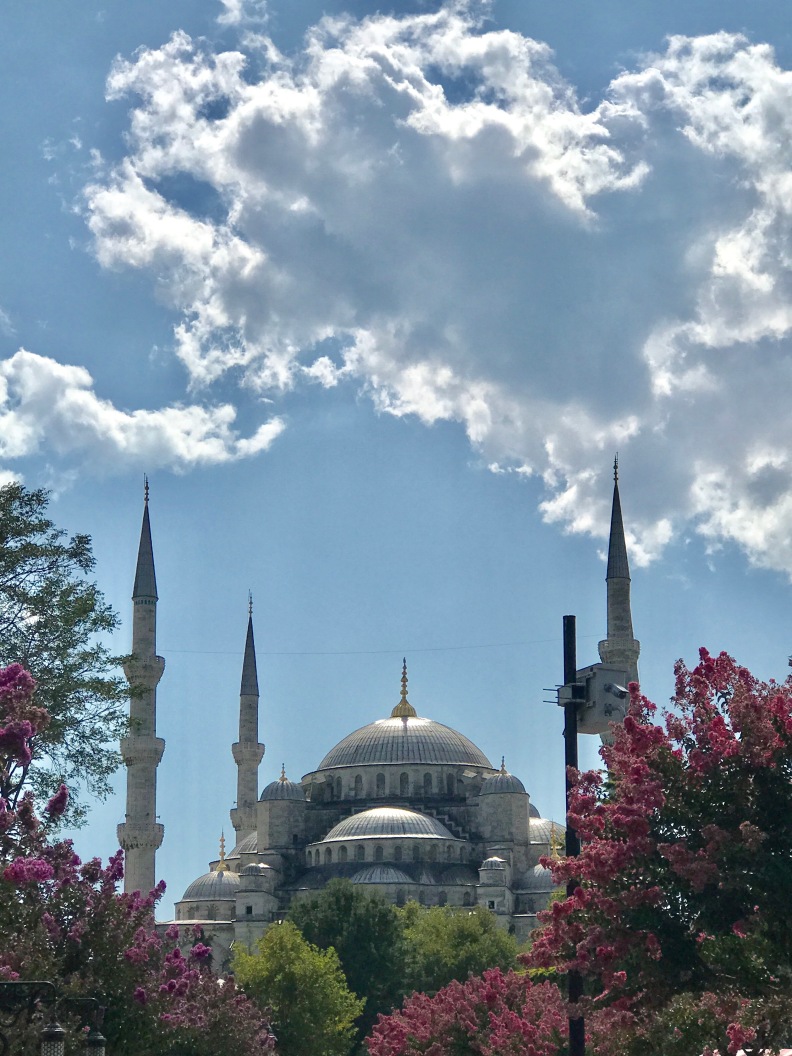 Published by The Moody Suburban Girl

Fashion Stylist, Journalist/blogger/Writer and a MBA graduate in Luxury Brand Management from IFA Paris, I like thinking about complex things and diligently dole out crisp pensive words over my faithful glass of wine. I love to trap people and everything fleeting in my web of words and attach my spirit to cats and Chanel. I am a Bengali hailing from India and believing in parallel universe. View all posts by The Moody Suburban Girl